The Branch Committee has set up a system of Unite Phone Buddies. This is self-help organisation where Branch members offer to telephone other members in their locality to check how they are coping during the health emergency.
We have nearly 2,400 telephone contact details for our members. These have been sorted on a postcode basis to group them into localities.

PLEASE NOTE we are offering to assist by making phone calls and emailing - WE ARE NOT offering to visit people.
We would now like our members - who are able to - to sign up as Unite Phone Buddies. You can do so by clicking here.
We have developed a script which can be used by the Branch Buddies and you can get a copy by clicking here.
Those members that sign up to become UNITE Phone Buddies will be emailed an individual list of members in their area (as far as possible) to contact by phone.

Unite, the UK and Ireland’s largest union launched a helpline and volunteer care service for its vulnerable members during the coronavirus crisis.
All Unite members throughout the UK can call the helpline number 0330 1072351. The helpline is fully staffed between 08:00 until 19:00 Monday to Friday with an overflow service at other hours.
The helpline is for vulnerable Unite members to call. A Unite volunteer will then be assigned to assist with picking up shopping, posting mail, collecting urgent supplies such as prescriptions or simply talking to someone who is experiencing loneliness.
Click here for further details.

Seventy five years after the liberation of Auschwitz, Unite has released a powerful short film with members who were recently part of a delegation of trade unionists and others to visit the former concentration camp in Poland.
In the film, which has been produced to mark Holocaust Memorial Day on 27 January, Unite members talk frankly and emotionally about their feelings and reactions to what they saw and heard at the largest of the Nazi camps.
Click here to view the film
There is a Unite Against Fascism Holocaust Memorial Meeting in the Unite Glasgow Office at 7pm on Tuesday 28 January.

At the first meeting of the Branch in 2020, the Branch agreed a motion in favour of supporting a second referendum on the question of Scottish Independence. The motion will be sent to the usual channels within Unite Scotland asking for this to be adopted as Unite policy. It must be emphasised that the motion takes no position on whether or not Scotland should be independent, only that the Branch supports a second referendum.
Another proposal that was discussed was the setting up of a Branch Walking Club and two Branch members were tasked with taking this forward. More details when we get them.
The Treasurer presented an advance copy of the annual accounts. It would be helpful, if members were willing to write to their previous Branch asking them if they are in a position to make a donation to our Branch funds. A draft letter can be downloaded from here

Branch members were amongst thoses suporting the demonstration at the Glasgow School of Art on 31st October. Unite members have been, and are, being treated abominably by their employer. The workers have issued the following statement:

"We are workers at The Art School bar & venue on Scott Street. We are also students and alumni of the GSA.
This August, after years of loyal service,  we were ‘invited’ to an unpaid meeting with your Student President and hatchetmen hired by the GSA, at which we were told our hours would be cut to zero with immediate effect. We were told that GSASA Ltd., trading as The Art School, was about to collapse and that severe cuts to wages were the only solution to save the business, and that we
wouldn’t get any hours till Freshers Week. In the meantime, we were unable to pay rent or bills.
Following a sustained campaign and  positive negotiations with senior management in September, we were assured that front-of-house staff would be issued new contracts guaranteeing minimum hours per week as well as the paid breaks and staff benefits already assured in previous terms.
Not even a month later, senior management  have already reneged on these commitments, revoking paid breaks and failing to honour the guarantee of minimum hour contracts, with some staff– especially those who speak out– receiving no hours at all. While many of us have been left with no hours or wages, senior management have sought to bring in more staff and have paid
them substantially more– despite claiming  there isn’t enough money to give us
minimum hour contracts!"
To download the full statement click here
To see more photos click here 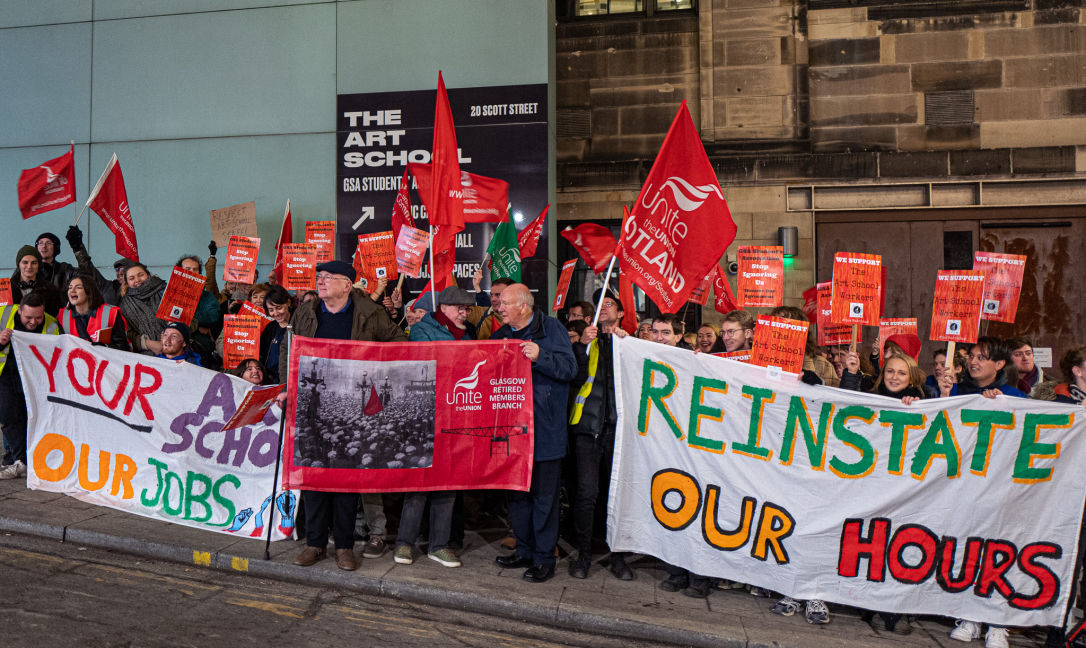 The Scottish Pensioners Forum organised a lobby of the Scottish Parliament to mark the United Nations International Day of Older Persons (UN IDOP). The lobby took place on Tuesday 1st October and Branch members were among those attending.
The objectives of the 2019 UN IDOP are:
⁕ To help draw attention to the existence of old age inequality, and how this often results from a cumulation of disadvantages throughout life -and highlight intergenerational risk of increased old age inequality.
⁕ To bring awareness to the urgency of coping with existing and preventing future old age inequality.
⁕ To explore societal and structural changes in view of life course policies: life-long learning, proactive and adaptive labour policies, social protection and universal health coverage.
⁕ To reflect on best practice, lessons and progress on the journey to ending older age inequality and changing negative narratives and stereotypes involving “older age”.
For more pictures click here

Strike for the Climate

The global school student strikes over climate change and the actions by Exctinction Rebellion have inspired millions of people. On Friday September 20th, school students walked out in another global day of action, and asked others to join them.
There was growing TU movement support for the 20 September Climate strike and the Glasgow Demonstration – including the TUC, the STUC , all the major unions including UNITE, Glasgow Trades Council and many local union branches.
Our new banner was on the demonstration (pictures supplied by Irene Graham) 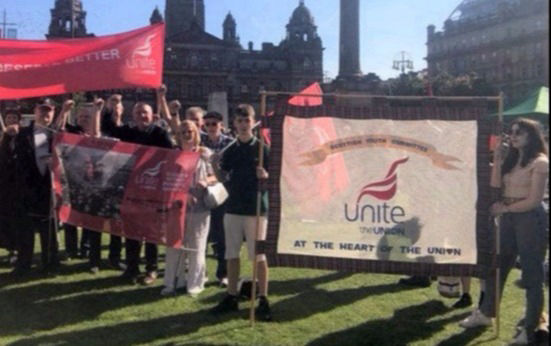 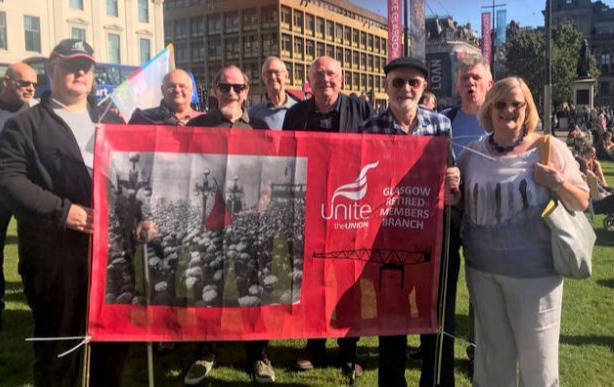 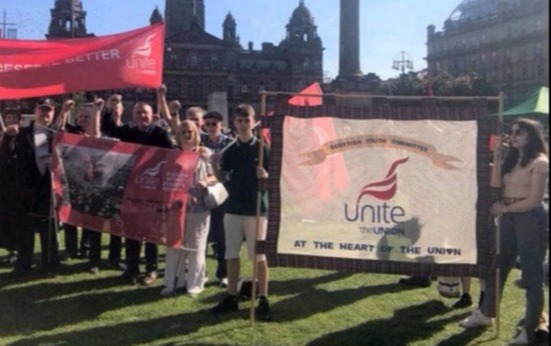 Branch member Jimmy Friel was presented with the first Unite Scotland Gold badge in recognition of his outstanding service to the union over many years. The presentation was made following the Branch meeting on 2nd May. Click here to see pictures of the presentation. 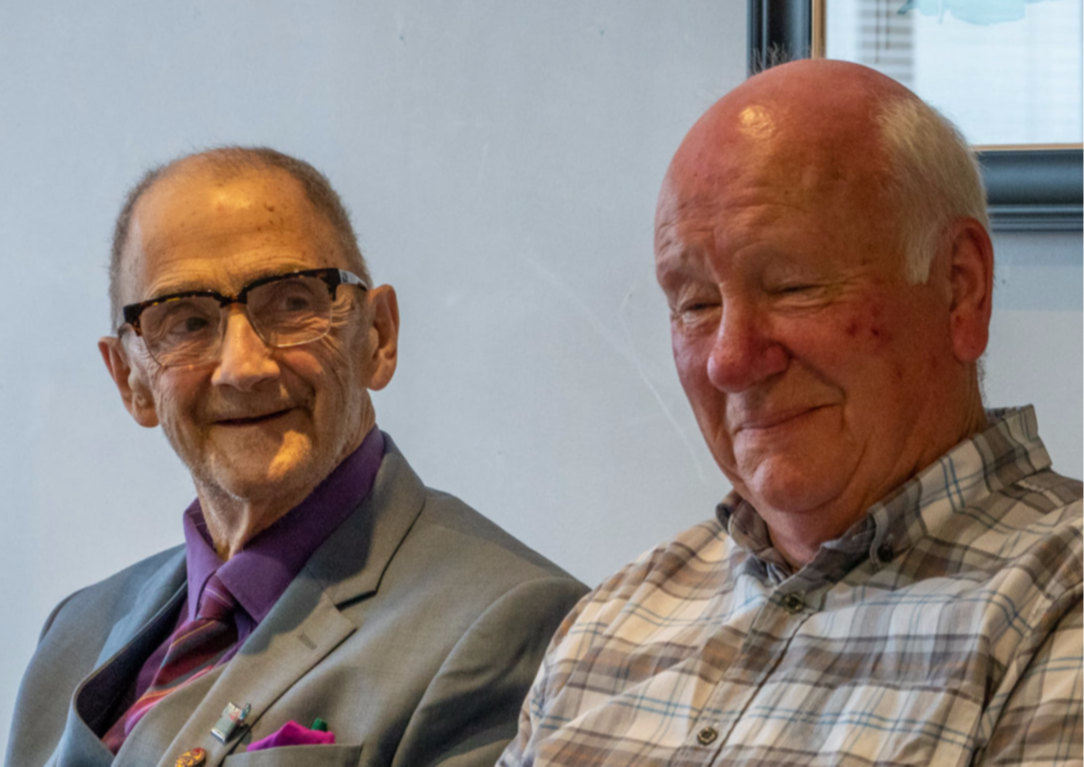 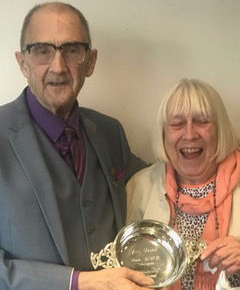 The May Branch meeting discussed and approved the design of the new Branch banner.

Terry Renshaw of The Shrewsbury 24 Campaign was the invited guest speaker at the April meeting of the Branch.
Terry outlined the history of the campaign to overturn the unjust prosecutions of 24 building workers following the first national building workers strike in 1972. The workers, all UCATT members, were arrested and charged with conspiracy, unlawful assembly and causing affray, apparently just for organising and forming picket lines at a McAlpine construction site. At subsequent trials held in December 1973, January 1974 and February 1974, 6 workers were sent to jail whilst others received suspended sentences. The Shrewsbury 24 have since campaigned for their cases to be referred to the Court of Appeal and hopefully, to have these miscarriages of justice overturned. Such a Court action might incur significant costs, currently estimated to be in the region of £150,000. Unite the Union has pledged to underwrite a substantial portion of the costs, with the remainder being dependent on donations.
Branch Chair Jake McLeod thanked Terry for his presentation. In addition to the Branch affiliating to the campaign, a collection from the 35 members present raised the sum of £273.00 by way of a donation.

If you who have younger relatives and friends from Glasgow seeking to return to education, the Glasgow Educational & Marshall Trust provides funding for the people of Glasgow to advance their academic or vocational qualifications - whatever age or stage.
The Trust gives grants to people who have lived in Glasgow for over 5 years to assist with furthering their education.
Amounts awarded range between £100 and £1250. We give around 60 grants every year to the value of about £50,000.
The Trust has been established for over 75 years and is in fact an amalgamation of a number of local Educational Charities.
The funds that the Trust distributes are solely from an investment fund that has been built up over generations.
The Trust has a board of 22 governors drawn from educational institutes, the churches, Glasgow City Council, Glasgow Trade Union Council, The Trades House of Glasgow, The Merchants House of Glasgow.
Further information from: https://www.gemt.org.uk/